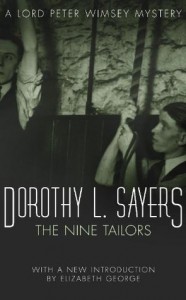 Lord Peter is such a handy bloke to have around. Not only can he solve mysteries like it's nobody's business, he's also a seasoned change ringer. So, when his car breaks down on New Year's Eve and he and Bunter are taken in at the vicarage in Fenchurch St. Paul, he helps his host out by joining a nine-hour-long bell ringing service.

‘Not in the least, Mrs Venables. Nothing would please me more than to ring bells all day and all night. I am not tired at all. I really don’t need rest. I would far rather ring bells. The only thing that worries me is whether I shall be able to get through the peal without making stupid mistakes.’

What the congregation does not know when they ring in the new year, is that at the same time, a man died mysteriously in their midst.

‘A corpse? Well, of course there’s a corpse. Lady Thorpe is buried there. You buried her yourself.’

‘Yes, sir, but this here corpus ain’t Lady Thorpe’s corpus. It’s a man’s corpus, that’s what it is, and it du seem as though it didn’t have no right to be there. So I says to Dick—’

This was a great story. Not only did the mystery prove to be more than a straight-forward who-dunnit, there were also a few more insights into Lord Peter's and other characters war time experiences. Sayers really made sure that her postwar settings did not deny the scars and damage that the First World War had left on the survivors. It's an aspect of the series I very much admire. And all of it is tied up with a lot of humor.

‘Superintendent,’ he said, ‘I think I have been the most unmitigated and unconscionable ass that ever brayed in a sleuthhound’s skin. Now, however, I have solved the entire problem, with one trivial exception. Probably you have done so too.’

‘Well, the murder,’ said his lordship, with an embarrassed cough. ‘I can’t quite make out who did that, or how. But that, as I say, is a trifle.'