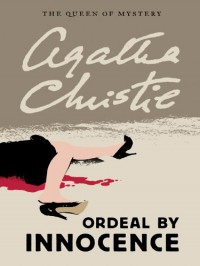 ‘All right. It’s your say so–and you’re sticking to it. Jacko didn’t kill her. Very well then–who did kill her? You haven’t thought about that one, have you? Think about it now. Think about it–and then you’ll begin to see what you’re doing to us all…’

I've been reading away on my Agatha Christie project for a while, and although the books tend to, with exceptions, follow a formula, there are other issues or themes that Christie discusses in the different books. This could be anything from discussing morality and justice (as she does in Orient Express and And Then There Were None) to superstitions (as she does in Endless Night).

She's not always successful with this in the sense that she makes a valid argument or finds common ground with the sensibilities of her readers - tho, maybe she was more successful with the latter in her own time - but she does pick up topics for discussion that have nothing to do with the murder plot itself.

In Ordeal by Innocence, Christie dedicates her "side discussion" to the topic of adoption.

‘All tragic histories in a way,’ said Philip. ‘All poor unwanted little devils.’

‘Yes,’ said Leo. ‘That’s what made Rachel feel so passionately about them all. She was determined to make them feel wanted, to give them a real home, be a real mother to them.’

‘It was a fine thing to do,’ said Philip.

‘Only–only it can never work out exactly as she hoped it might,’ said Leo. ‘It was an article of faith with her that the blood tie didn’t matter. But the blood tie does matter, you know. There is usually something in one’s own children, some kink of temperament, some way of feeling that you recognize and can understand without having to put into words. You haven’t got that tie with children you adopt. One has no instinctive knowledge of what goes on in their minds. You judge them, of course, by yourself, by your own thoughts and feelings, but it’s wise to recognize that those thoughts and feelings may be very widely divergent from theirs.’

‘You understood that, I suppose, all along,’ said Philip.

‘I warned Rachel about it,’ said Leo, ‘but of course she didn’t believe it. Didn’t want to believe it. She wanted them to be her own children.’

Having read her points, it seems Christie argues that adoptive parents can never have the same bond with "their" children as natural parents and that all adopted children will carry a chip of rejection on their shoulder. I am not going to argue for nor against this thesis, but I do acknowledge that there is a lot of controversy in Christie's statements on the subject of adoption in this book. There is no indication of what made Christie bring this up other than to have a side discussion in the book, but to me these side issues - however controversial or even offensive they may be - are an aspect of what I enjoy about the books.

I guess, Christie's use of the uncertainty about familial trust as the major drivers of plot in this particular mystery makes it quite similar to Appointment with Death, but family set up is completely different in this story. It has been fun to watch the mystery unravel, knowing that the similarity with her other books is just one of the red herrings that Christie is so famous for.

Who is it who said: “Nothing is ever settled until–”’ ‘“Until it is settled right,”’ Miss Vaughan finished for him. ‘Kipling.’