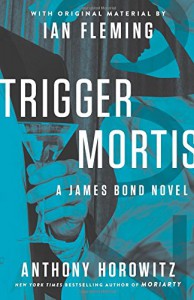 ‘Don’t say that to me, you bastard! It’s what you want too – don’t think I don’t see it. You know what the big difference is between us? You can’t live with a woman in your life.’

Trigger Mortis is Anthony Horowitz's continuation of the Bond series. The story sets in after Goldfinger and begins with the description of what happens after Bond gets the girl

- in this case, of what happens to Bond's relationship with Pussy Galore

I thought it was an interesting concept to show this side of Bond's life. Fleming didn't really do this. There were flashbacks to some of Bond's previous adventures and mentions of previous characters, but apart from professional acquaintances, characters did not appear again - as far as I can gather - in the later books. But of course, each book is a new adventure, and that is famously just as true of Bond's love life.

Plot-wise, the story gets going after Bond's relationship breaks up. He's sent on a mission to investigate some goings on at the motor races, which may or may not be manipulated by SMERSH in the efforts to win at .... everything.

This is a new environment for Bond. He can drive, but not well enough to compete at the professional races, nevermind at one of the most difficult courses in the F1 circuit - the Nuerburgring, which back in the day of when the book is set (1957) still only consisted of the infamous North Loop.

So, adventure ensues and before long Bond encounters the real villain of this book:

Curiouser and curiouser, Bond thought to himself, although he doubted he was going to bump into any white rabbits. Much more likely a mad hatter.

Jason Sin is a truly magnificent villain. He is evil to the core and makes Dr. No look like a big old softie. The main difference of course being that while Dr. No had an agenda doing his evil deeds, Jason Sin has neither values nor interests - he's arbitrary, and seemingly without emotions of any kind, the epitome of the notion that the opposite of love is not hate, but indifference.  He, of course, also has an inventive way to dispose of his enemies:

‘Right now, in front of you, there are forty-five different ways to die. They are printed on the backs of these cards. Some of them demand your own co-operation.

The interesting thing about the villain in this piece is that Horowitz, quite contrary to Fleming's tradition, made Sin not only the perpetrator of crime but also a victim. In a way, Sin's actions are the result of the trauma he endured. It's a simplistic explanation of Sin's psychology. Too simplistic, but this is a Bond novel, BS is the order of the day.

Nevertheless, Sin's background story does something that is different in that is places responsibility for crimes against humanity at the door of the parties that usually are portrayed as the heroes.

In this case, the US in the Korean war.

Another interesting aspect was that, unlike Fleming, Horowitz added in comments about the time in which Bond lives. I have often wondered what a Bond novel would be like if it contained criticism of contemporary society as part of any of the characters' parts. Now we know, even though it's clear that it's Horowitz's own reflection written from a point in the future. It still helped to create context for Bond and the way he acts in the books.

Anyway, the service is crawling with sisters. You know it and I know it. Look at that dreadful man Burgess. It’s a gift to the Soviets, letting them set up their honeytraps, snaring civil servants who are too young and too scared to know better. God knows how many secrets we’ve lost that way. Change the law and let people be what they want to be – that’s what I say. And as for you, maybe you should try to be a bit less of a dinosaur. This is 1957, not the Middle Ages! The second half of the twentieth century!’

So, with all of these intriguing aspects going on, why did the book not work for me as well as Goldfinger - it is a sequel after all?

It's not like I did not enjoy the book, but I also didn't like it. I think the most important aspect was that the book consisted of mostly description. The story seemed to take a backseat. It was just really hard to keep interested because all of the endless description (and explanation) between the scenes that moved the plot forward were just really boring. Incredibly boring actually. While I might despise Fleming for many of his views, I do admit that he could write. Descriptions in the original series were evocative and helped to show the characters as Fleming needed them to be understood. In Trigger Mortis, I got the impression that Horowitz included a lot of description to show that he had done his research as an author (which I applaud, but I don't want to read about it). So descriptions did not work for me to picture the scenes or experience the atmosphere, but seem to be used to tell why something was happening.

A great evil had been done to him but it had not made him evil. Sin might claim that what had happened at No Gun Ri had turned him into the monster that he undoubtedly was but Bond had escaped from the hell of a living grave and he had left nothing of his inner self, not an inch of his humanity, behind. That was the difference between them. It was why he would win.