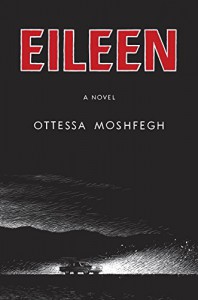 I picked Eileen as one of the books that looked intriguing on this year's Booker long list. Mostly, I was drawn to the cover and to the premise of a dark mystery set in 1960s Boston.

Sadly, the book didn't deliver. Instead of the mystery, I got a story of misery and self-loathing. To be fair, this could have been intriguing as the book tried to focus on a character study of the main character, Eileen, who's life is made miserable by her having to care for her alcoholic father. There is mental abuse and despair. The situation is not helped by her working in a private prison for adolescent boys.

I thought this was such a promising setup. However, as the story dragged on - even a character study needs some plot - I just wanted the book to end because it really wasn't going anywhere.

By the time I was ready to give up, we finally, FINALLY, had a plot twist. Unfortunately, it was a little too late and too outrageous to fit in with the preceding story.

Seriously, it was such a rushed turn of events that I was not just underwhelmed but it made me wonder whether this afterthought had been suggested by an editor after the first draft had been delivered....Not impressed, and I have no idea how this ended up on the long list.

I have since picking this up read some reviews which try to compare Eileen to a Patricia Highsmith novel. I can see how someone would want to draw the comparison. It is flattering, but a Highsmith novel this is not. Maybe Mossfegh's next novel - if she decides to write another one of the same ilk -  will be, but Eileen lacked the atmosphere and the suspense to come anywhere close to justifying that comparison with one of the great writers of dark and twisted mystery thrillers.