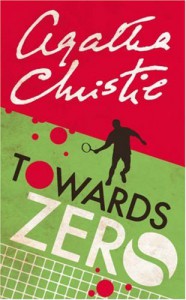 ‘I like a good detective story,’ he said. ‘But, you know, they begin in the wrong place! They begin with the murder. But the murder is the end. The story begins long before that– years before sometimes– with all the causes and events that bring certain people to a certain place at a certain time on a certain day.

As with many others of Christie's stories, Towards Zero relies on a set of characters, the type of which is already familiar to Christie's readers. The setting (a version of country house) and plot (errm....murder), is also in line with the expectation of the "typical" Christie novel. What I had not expected was for Christie to actually question the whole setup of her "typical" story by proclaiming that the story cannot stop with the detection of the murderer but that it needs to reveal the background in order for the story of the murder to be understood.

It's almost like Christie used this story to prove that the police investigation needs to include an understanding of the psychology of the characters involved in order to successfully solve the crime.

But did she need to do this? Surely, the fact that her Marple and Poirot act as the psychologists to aid the inspectors in her other books is proof enough that there is a partnership between the two?

Towards Zero does not feature Marple or Poirot but instead has Inspector Battle, who takes on the role of the "enlightened" policeman. We learn early on that he has little time for amateur psychology, and later we learn that he is also capable of trickery - although, Christie stays away from implying that there is a member of the police who would use trickery to get a murderer to confess. No, she added a different character to do this.

Which brings me to one of the few complaints I have about the story - the multitude of characters. There are so many of them that it is hard to keep track of. Some are mentioned, but then disappear in almost the next scene - with no relevance to the story.

Were they included to merely bulk out the pages?

I mean I really enjoyed the main plot and characters, but I wish she had spent more time fleshing them out, rather than just throwing new characters in the mix. Maybe getting to learn more about the characters would have also helped the ending, which reminded me of the somewhat creepy relationship in Du Maurier's Rebecca:

He said gently as he came towards her: ‘Last time I had my hands on you, you felt like a bird– struggling to escape. You’ll never escape now…’

She said: ‘I shall never want to escape.’