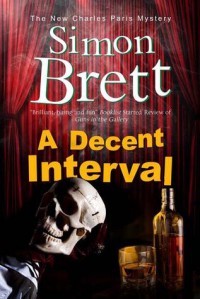 Simon Brett's books had been on my radar for quite some time, so when I found a BBC radio production of A Decent Interval - starring Bill Nighy - I had to give it a shot.

The story basically focused on an out-of-work actor who finds work as a minor part in a production of Hamlet - to his annoyance the leading roles are given to two reality tv "celebrities" who can't act. As the story goes on, Hamlet is found seriously wounded and Paris (the actor) is dragged into the who-dunnit.

As far as murder mysteries go this one was decent, but nothing to shout about. I am not sure it would have held my interest if I had read this in book form.