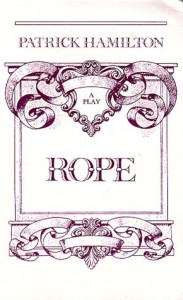 For those of you who have access to BBC iPlayer, you can still listen to the radio production of Rope featuring Alan Rickman for a few days.

Rope was also famously turned into a Hitchcock film starring James Stewart. However, the film version, as good as it is, is set in a different time and misses out, in my opinion, on one of the crucial issues of Hamilton's original play, even though it does try to update the discussion.

The original play was set in the post-war London of the 1920s with the questions and issues raised by the First World War still very much on the minds of people. It is with this background, that Hamilton weaves in the question of when murder becomes socially and morally acceptable - when is killing murder and when is it war.

I had so far only seen the film, but the original play is really worth listening to - even if some of the dialogue and plot are a little forced.