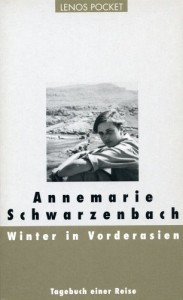 Winter in Vorderasien is Schwarzenbach's account of her first trip to Turkey, Syria, the Lebanon, and Palestine. She made the trip in 1933 and the impressions she gained would not only serve as inspiration for a collection of short stories (Bei diesem Regen) but would also determine her fate as a travel writer - as she would continue to travel and share her experiences through both her photographic work and her writing.

While this not the best of her work with respect to writing style, the fascinating aspect of this book is that it is a frank account of her impressions. The short stories she would later extract from these initial sketches are much more polished stylistically, but they also loose some of the edge with which Schwarzenbach takes account of the events of her travels at the time - inconveniences, frustrations, and not all but some of the unpleasant experiences are accounted for in Winter in Vorderasien which will not feature in the later revisions. Again, it must be said that the revisions are offered as a work of fiction and must be read as such whereas this book is not and as such portrays much more of the Western European attitudes of travellers in a world which is still governed by colonialists. Although Schwarzenbach does not share all of these attitudes, she is subjected to them as she could not have undertaken the trip without depending on the established ex-pat society she meets on the way, and this does come across in her impressions - even though her own thoughts and attitudes would be developed in more detail in the subsequent short stories.