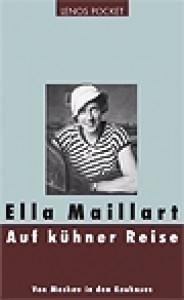 This is another book by Ella Maillart about her travels to the far flung places of the earth whose names sound like she made them up for a children's bedtime story.

I read Auf Kuehner Reise (tr. "Daring Travels" - it may also have been published as "Ausser Kurs", i.e. "Off Course"), which was originally published in French as Parmi la jeunesse russe (tr. "Amongst Russian Youth"), in the German translation. Unfortunately, this is another book that has never been translated widely (but, IMO, really should have been). There are probably several reasons for the lack of interest:

First off, this book is basically Maillart's first book. She always travelled and was fond of adventure but it was not until her return from Russia in 1930 that she was persuaded to write about her experiences.

Second, the trip and the book were really quite audacious: As a Swiss national, Maillart had difficulties obtaining a visa for the trip. Switzerland had not recognised the Soviet Union politically and relations between western states and the Stalinist country were rather tense.

When she finally does get permission to travel in the SU, she is under no illusion that what ever she writes may endanger her trip and also the people supporting her whilst travelling. There is a scene in the book where she alludes to being followed by a member of state security. She quickly dismisses the scene but I could not help wondering how closely she had been watched or had had similar encounters that have not made it into her book.

She also thinly disguises the identity of the people she meets. For example, Moscow in 1930 was severely lacking accommodation - Maillart could not afford to stay in hotels (and at any rate would have preferred to stay with locals) and finds lodgings with Countess Tolstoy (daughter-in-law of Leo), who is a friend of a friend. She never mentions her outright, tho. And only refers to her as Madam T. or Frau K. (depending on which edition you read). So, she is quite aware from the outset that if she chose to write anything political, it might have consequences for herself and the people around her.

As a result she wrote down her observations with little criticism of what she saw and little judgement. She does compare some of the ways and attitude she observes to her experiences in Germany or Switzerland but, generally leaves out any in depth valuation of which one is better etc.

The non-political tone of the book led to a rejection by western readers when the book was published in 1932. I assume that readers expected to have their the rumors and stories about the grim realities of Stalinist Russia confirmed and were disappointed by a book that spent a lot of time talking about the attitudes of the state towards building a future by providing education and opportunities for its youth. What Maillart also describes - but does not spell out - is how the Stalinist regime colonizes the country and bit by bit eradicates differences between its people and destroys true individuality. Again, she does not analyse this within this book but it is present in her observations. (She is more vocal about it in her later book The Cruel Way.)

What was also fascinating about the way Maillart wrote this book was the way she used her observations to tell about the ideas she favoured, like the emergence of women into the work place and by extension a more equal society or the promotion of education for people of all walks of life.

Maillart was not naive enough to believe or promote the communist idea in her book. Far from it. Communists do not get many favourable mentions in the book at all. She mostly focuses on the discussions she has with the young people that she travels with and the people she meets on the road. However, this being her first book, I guess people would not have grasped that Maillart herself was the most staunch supporters of freedom and individuality.

As for the trip itself, the book is divided in to two parts: Maillart starts off with a short stay in Moscow - which made for fascinating reading because there are so few first-hand accounts that I have read of westerners travelling there during Stalin's reign.

The second part of the book, describes her trip from Moscow to the Caucasus - more specifically Svanetia, which I had not heard of and which really does sound like a fairy tale place.

Svanetia, in northern Georgia, at the time of her trip (1930) was a very remote place. Not only is it surrounded by the highest mountains in Europe, but at the time, there were hardly any transportation links or any means of communication, or facilities which would have been commonplace in other parts of eastern Europe - such as plumbing, reliable water supply, not to mention electricity or heating systems - apparently some houses were still constructed without chimneys providing no ventilation for fires inside the house (and making heating them difficult).

It really must have been a fascinating experience. 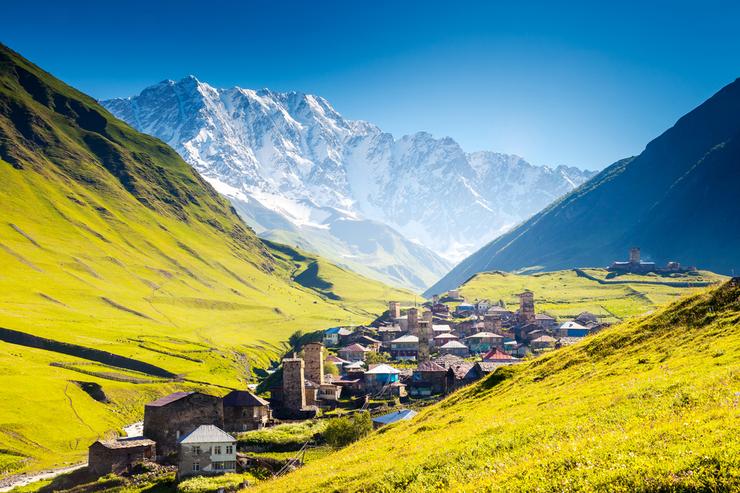 By comparison, only 9 years later, Maillart would describe a trip across Persia and Afghanistan, which was made possible by the relative ease with which she and her companion were able to find food and lodgings and source parts and petrol for their car.

The trip in what is now Georgia was much less sophisticated.

She describes how people would watch a film at an improvised cinema, and believing it to be real, would check behind the screen to find the actors; how the radio was such a novelty still that people could not believe it was possible for it to transmit in real time; how people were only slowly adjusting to the change in times and customs.

For me the second part of the book was even more enjoyable than the first. For one it showed a part of the world at a time when no one else wrote about, at a time that must have been both wondrous and frightening at the same time.

At the same time, the book shows Maillart at a point, a seminal point, in her life where she makes a choice to abandon Europe to become a traveller. She shares some of her motivations in the book and we also get to see some of the guts it would take for her to make the decision as it is quite clear that she'd not choose (or have the means to choose) travelling in comfort.

But then, if she could hike across the Causcasus with a severe leg injury (a dog bit a chunk out of her) and no medical help, what else was there to stop her?

So, this was only the first of her many extraordinary adventures.