Have you ever heard of Clärenore Stinnes?

Well, before picking up this book I had not. As some of you may know, I rather like reading about travel. What's more, I have a keen interest in reading about women travelers in the first half of the 20th century. And yet, I had not heard of the first woman to circumnavigate the world in a car. That was Clärenore Stinnes' claim to fame.

The trip was a phenomenal feat. Not only were there hardly any roads in large parts of the world when Stinnes started the trip with her crew in 1927, but there were also wars, civil unrest, political intrigues (who would fancy a trip through Stalin's soviet union where one could be arrested at any time?), natural disasters, limited resources, no telephones, and other difficulties. Stinnes and her companion nearly died a few times along the trip. The fact that they lived to tell the tale is down just as much to luck as to sheer determination. The fact that they hardly spoke about their trip afterwards is just as intriguing as the trip itself. Stinnes did write an account of the trip (Im Auto durch zwei Welten) but once this was published both she and her companion (later husband) seem to have withdrawn from the public spotlight.

PferdeStärken (tr. "horse power") is a fictionalised biography of Stinnes, but what is more, it is a phenomenal work of historical fiction which portrays not only Stinnes' life but also the lives of her father, other famous industrialists, politicians of the time and even the wider social circumstances, economics, and political events of the times that the book is set in.

Starting with Stinnes childhood, the book starts in the early 1900s and leads up to the 1970s. Therefore, the author, Winter, takes on the rather ambitious task of writing up one of the most tumultuous eras in modern history. It is an endeavour that reminded me of Ken Follett's most recent trilogy which I hated reading with a passion. I have even less patience for Follett's attempt at writing a history of the world now that I know that this book, PferdeStärken, exists and shows how intelligent and enjoyable historical fiction can be when written well. The strong point of this book for me was that it did not patronise the reader. In contrast to Follett, Winter did expect his readers to be familiar with historical figures and a timeline of events in history, geography, and also different aspects of predominantly German society and culture. Of course, the purpose of Winter's book was different from Follett's trilogy and I am not dismissing Follett's work on the basis that it may have read like a watered down history text book. What made PferdeStärken a much more enticing read for me, however, was that it offered the historical context as just that - context, a canvas against which the story of the Stinnes clan was told.

If I wanted to find out more about a specific event or person, there is nothing stopping me, but it was just nice to have characters like Walter Rathenau, Gustav Stresemann, and even Harold Nicolson, being woven into the story without any kind of info dumping. This actually helped make the story read like biography rather than fiction - it gave the story credibility. 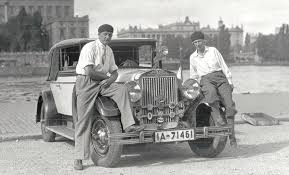 I have been debating with myself whether I should post a review for this - and whether to draft this post in English or German. This book, PferdeStärken, was never translated into English. Even its German edition is unlikely to be re-issued or even re-printed at any time. However, I felt that, even if this excellent book should disappear at some point, it is worth making the story of it known to others who may also want to know about Clärenore Stinnes - the first woman driver to circumnavigate the world in a car.

Many thanks to Martini for recommending this book!