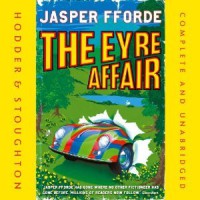 "Somehow ‘Fucked up’ made it seem more believable; we all make mistakes at some time in our lives, some more than others. It is only when the cost is counted in human lives that people really take notice."

This book was a recommendation that arose from a discussion about a non-fiction book about extinction. I have a slight obsession with dodos and had to read The Eyre Affair because of it.

"I had been with Boswell and SO-27 for eight years, living in a Maida Vale apartment with Pickwick, a regenerated pet dodo left over from the days when reverse extinction was all the rage and you could buy home cloning kits over the counter."

"I used the time to get up to date with some reading, filing, mending the car, and also – because of the new legislation – to register Pickwick as a pet rather than a wild dodo. I took him to the town hall where a veterinary inspector studied the once-extinct bird very carefully. Pickwick stared back forlornly, as he, in common with most pets, didn’t fancy the vet much. ‘Plock-plock,’ said Pickwick nervously as the inspector expertly clipped the large brass ring around his ankle."

However, inconceivable as it may sound, there is much more to enjoy in this book, because as it turned out, this is not a book about dodos, but about a world in which time travel is possible and  - hold on to your hats - where it is possible to enter books and physically meet characters. With great power, comes great responsibility, and there even is a special police unit that deals with works of literature - and the misuse and mistreatment of manuscripts and characters.

And why would you think such a unit is required? Because some villain might take it into his mind to hold the world at ransom and kidnap a beloved character. So, this is where our heroine, Thursday Next, comes in to save the world from the destruction of literature and life as we love it.

It is shocking and distressing to even think about such villainy, so best to soothe the mind with another quotation about the adorable Pickwick:

"I left Chester’s owner and the official arguing together and took Pickwick for a waddle in the park. I let him off the lead and he chased a few pigeons before fraternising with some feral dodos who were cooling their feet in the pond. They splashed excitedly and made quiet plock plock noises to one another until it was time to go home."