Love Game: A History of Tennis 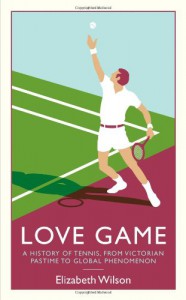 "The term 'love' is also mysterious, although possibly it had something to do with the universal practice in earlier times of betting on matches ('for love or money'). That one word has caused more controversy than any other aspect of the game, but these linguistic mysteries only add to the romance of tennis."

Every year in June, a friend of mine despairs over many comments of mine - both on social media and when meeting up in person - because I will be in the throws of the ongoing thrill that is the tennis season and my friend absolutely detests the sport - and especially the scoring system. Or, rather, I should say the the 'idiotic' scoring system.

Over the years, this has developed into a bit of a joke between us and by now we have made it a tradition that she will comment on the matches as well - which usually is hilarious.

What has all this to do with the Love Game? Nothing, except that when reading this book I was reminded of my friend and how much she would despise the book. Not so because Love Game is about tennis, but because there seem to be very few answers in the book to questions that the non-tennis enthusiast might have. What I am getting at is that, while reading this book, I was not sure who it was written for. Was it written for people who are already familiar with the sport or for people who were looking for an overview of the sport and its history?

Most of the book read like a piece of academic work, although less like a research paper and more like a literature review, touching on subjects and stories, but never fully investigating them.

Also, having followed the sport since the late 1980s and actually having read some of the books that are referenced in Love Game, much of the information was tangible, if not even familiar. Even to a degree where it was possible to notice where stories were summarised to the extent that they may have lost some of their poignancy.

As a result, I liked the book as a compendium of tennis history but only as a quick introduction, as an appetizer, if you will. I would doubt tho that the fairy impersonal, dare I say passion-less, style of the book would enthuse anyone to find out more about the personalities and issues that have shaped the sport since its inception.