The Seasons of the Soul 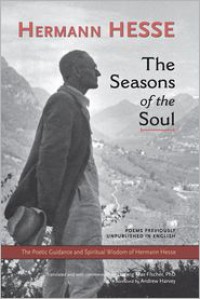 “To cut through the charades of this world, to despise it, may be the aim of great thinkers. My only goal in life is to be able to love this world, to see it and myself and all beings with the eyes of love and admiration and reverence …”

Hesse is one of the writers I fell in love with at school, at a time when many other people despised reading because it was a task, because they had to. I was lucky. Our curriculum was rather interesting and allowed for some flexibility in the choice of authors and themes.

We read two books by Hesse - Beneath the Wheel (also published as The Prodigy) and Steppenwolf - and both have remained favourites of mine over the past 20 years.

However, it is only now that I am looking at Hesse's poetry. I like poetry but it is not something I would pick up easily and am only doing so now because it is a format I have neglected for some time and really want to get to know better. So, what better way than to delve into some of Hesse's?

The Seasons of the Soul is not one of Hesse's original compilations but rather a selection of poems put together by a Hesse aficionado, L.M. Fischer, who also happens to be a scholar, and one with an excellent ear for Hesse's work which results in a rather lean and crisp translation of the poems he selected.

It is actually rather cute at points that his "nerdiness" shines through in his attempt to make Hesse's writing accessible to new audiences. At one point, I felt myself cringing slightly at the authors' reference to Lennon's Imagine, but then had to admit that I,  too was thinking about that song as well as Season of Hollow Soul (k.d. lang). I guess it is in the nature of poetry to evoke associations like that.

As for the book itself, The Seasons of the Soul is a short but pretty good introduction to Hesse's poetry and the concepts that he contemplated throughout his life and which are reflected in his writing. The book is not, however, a comprehensive biography and it would be worthwhile to look at a some biographical notes whilst reading The Seasons of the Soul.

All blossoms will wilt,

each youth fold into the mold of age.

Your heart must always be ready to leave

and ready to begin again,

with courage and without regret.

Every beginning offers a magic power

that protects us and helps us to endure.

This journey through the realms of life

was not meant to end in one home only.

World spirit does not want to tie us down,

wants us to soar into the open.

When we stay too long in one place,

get stuck in norm and habit, we wear out.

Only embarking on new, unknown journeys

can free us from the prison of stagnation.

Maybe the moment of our death too

is just another gate to new dimensions.

The call of life to us will never end.

Well, then, my heart, take leave and heal.