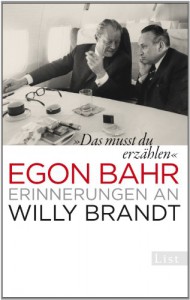 I received this book as a Christmas present from a friend who obviously remembered my enthusiasm for the memoirs of Willy Brandt which I finished reading not long ago.

This in itself makes this book special for me.

Egon Bahr was a journalist in Berlin who later joined Willy Brandt's staff as a key figure in Brandt's endeavours to negotiate the tricky waters of German post-war diplomacy. Though Bahr's life in itself is interesting enough, this book deals with Bahr's relationship with Brandt. Moreover, the book provides additional background to Brandt's own memoirs. Interestingly, knowing that Brandt left out certain aspects or events from his own memoirs deliberately does not take away any of  Brandt's credibility. On the contrary, Bahr's account pays tribute to Brandt and emphasises a character trait that is not usually associated with politicians - humility.

Unfortunately,  - and this is my only criticism of Bahr's book - Bahr himself seems quite fond of name-dropping. This would not even be such a big issue - after all he did meet a lot of people - but he often refers to people without telling why or how they related to the events or circumstances that Bahr was describing. It's like he starts telling a story, drops a name, and moves to the next recollection without finishing the first.

The resulting problem I had was that, having read Brandt's memoirs recently, I had the benefit of knowing what he was referring to, but without Brandt's memoirs, I would have been lost on quite a few occasions throughout the book.

So, Bahr's recollections are a great read for anyone interested in German politics and for anyone interested in the diplomatic strategy between the US and the USSR during the cold war. However, with respect to the motivations behind Brandt's policies and his personality, Bahr's account - though complimentary to Brandt's own memoirs - is heavily relying on pre-existing knowledge.