Having read several of Annemarie Schwarzenbach's stories in the last few weeks, I must admit that I am finding it difficult to write reviews for them. Nothing I can jot down in these lines can do justice the experience I have had reading what I can only describe as the manifestations of a tormented soul desperately clinging to life.

I will write more about AS life as a traveler, journalist, and photographer, and about the background to much of her struggle in another post/review - once I finish reading the biography compiled by Alexis Schwarzenbach. Suffice it to say for this review that she was in many respects a remarkable person who was young at a time of international turmoil, matured in the years between the wars, lived at the heart of the European artistic society, and struggled to find a place in a world that increasingly stifled and throttled liberal individual thought.

Living on the edge took its toll and by the early 1930s AS suffered from nervous breakdowns and a drug addiction, both of which she sought, sometimes forced by friends and family, to overcome with the help of doctors and rest cures. To little effect.

This novel, Das Glückliche Tal (The Happy Valley) is a reworked version of notes and impressions of a trip to northern Iran in 1935 which had already been worked into Tod in Persien (Death in Persia) - which remained unpublished during her lifetime. The main difference being that the second version is more personal and - having being written whilst in rehab in 1939 - deals intensely with some of AS' personal demons. Das Glückliche Tal (The Happy Valley) was published in 1939.

The story is written from the perspective of an unnamed protagonist who travels to northern Iran/Persia and sets up camp in a valley at the foot of Mount Damavand. As the days and nights go by, the MC muses over how hard it is to find meaning in his life and how this travel he embarked on was an escape from the limitations of western traditions and a quest to find a personal freedom. Ironically, the valley becomes another form of prison:

["I have not changed since I was a child: the same desires, the same doubts. Only I am now cautious. At that time, all roads were open - why did I not let it satisfy me, why did I stubbornly have to follow diversions, such detours - and all of which ended up here, in this "Happy Valley", from which there is no return."]*

To the MC as the valley's exit seems blocked by Mt. Damavand - which is equally majestic, awe-inspiring and oppressive. 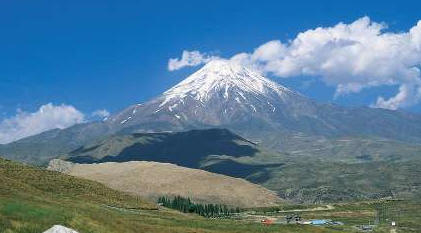 ["But it is useless to rebel. I cannot silence the wind and not stop the river, I cannot escape the walls of my tent and this valley, I cannot spare myself for one single hour. I'm waiting. Waiting on another day?"]

However, the MC's struggle against nature, against the fevers brought on by malaria, heat exhaustion, and other illnesses as well as fevers brought on by opium, reflect the struggle with his own mind. There are only two ways to escape from the valley: death or facing and overcoming his fears and feelings of utter desperation. To escape is to acknowledge that there is hope of finding meaning in his life. But without meaning there is no escape.

To sustain the fight for his "escape" from the valley, the MC attributes meaning to everyday objects - pens, books, blanket, etc. in a similar way as patients in a mental health ward may be occupied with activities:

["It is one of the proven tools of mental hospitals, to prescribe to patients a precise daily schedule, which employs the sick, distracts and saves them from vacant hours."]

Finally when faced with the angel of death, the MC realises that there is something that he cannot give up, one thing he must keep pursuing: to move other people by the power of the written word. And this is where the MC and AS merge. For AS herself it was writing and work that helped her to relinquish her own problems and her drug addiction - even if only temporarily. As her friend and travel companion Ella Maillart wrote in The Cruel Way (1949):

"She was harassed by her fight with the doctors: they would not understand that writing was life and food to her, that the regenerative cure of enforced rest applied to dyspeptics and hysterics could not suit her."