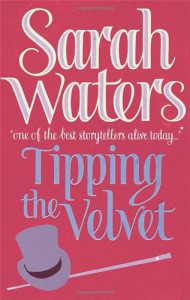 "And last of all I had a fondness – you might say, a kind of passion – for the music hall; and more particularly for music-hall songs and the singing of them. If you have visited Whitstable you will know that this was a rather inconvenient passion, for the town has neither music hall nor theatre – only a solitary lamp-post before the Duke of Cumberland Hotel, where minstrel troupes occasionally sing, and the Punch-and-Judy man, in August, sets his booth."

Delicious, sensuous, fun. These are not usually the first words that come to my mind when describing what essentially is a Bildungsroman - a coming of age story.

Set in the late 1880s, early 1890s, nineteen year old Nancy Astley falls in love: first with the theatre, then with a music hall star. What follows is a topsy-turvy romp of an education of girl from a rather sheltered background who embarks on life:

"I remembered Walter saying that we were at the very heart of London, and did I know what it was that made that great heart beat? Variety! I had looked around me that afternoon and seen, astonished, what I thought was all the world’s variety, brought together in one extraordinary place. I had seen rich and poor, splendid and squalid, white man and black man, all bustling side by side. I had seen them make a vast harmonious whole, and been thrilled to think that I was about to find my own particular place in it, as Kitty’s friend. How had my sense of the world been changed, since then! I had learned that London life was even stranger and more various than I had ever thought it; but I had learned too that not all its great variety was visible to the casual eye; that not all the pieces of the city sat together smoothly, or graciously, but rather rubbed and chafed and jostled one another, and overlapped; that some , out of fear, kept themselves hidden, and only exposed themselves to those upon whose sympathies they could be sure."

Despite all her errors in judgement, Nancy is such a great character that I could hardly put the book down to hear her story, wanting to make sure she would be ok and at times envying her freedom from care at the same time.

I should point out that my rating system is rather conservative and that I reserve 5* for books that truly knock me over, and that will stay with me for a long, long time to come.

The only reason that keep me from giving Tipping the Velvet my full five stars is that some of the dialogue is a little too forced, too smooth - a minor flaw that vanishes into insignificance when compared to many other novels (especially in the romance genre) because the writing is still excellent. However, knowing that The Night Watch and The Paying Guests are just that little bit more powerful (in my estimation) it does not feel right to rate Tipping the Velvet at the same level of excellence.